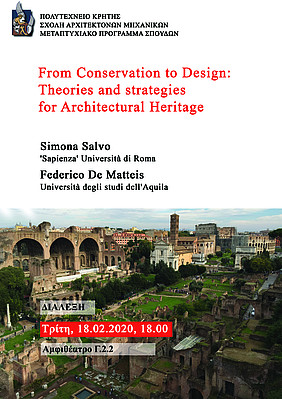 Her fields of interest are focussed on theoretical and methodological issues concerning architectural conservation, especially of modern architecture, and on the dissemination of restoration principles and theories in today's globalized culture. Within this framework, she cultivates and is responsible for cultural, scientific and academic international cooperation with several international academic institutions in Europe, China, US and Brazil, where she has been visiting professor at various stages. She has been member of research teams for various research projects of national and international relevance and has participated to a number of conferences, seminars and workshops on architectural conservation, especially on the conservation of modern and contemporary architecture.

On the basis of a long-lasting research activity, she has recently been awarded by The Getty Foundation with the 2018 Keeping It Modern Grant to coordinate research and conservation planning on Gio Ponti’s School of Mathematics at Rome’s university campus.
She has published largely on scientific reviews and encyclopaedias and has authored articles and books. Salvo is also a registered architect and has practiced professionally in the field of architectural conservation, experiencing - among other works - the restoration of the Pirelli Building in Milan in 2002-2004.

Federico De Matteis  -  Architect, is Associate Professor of Architectural Design at the University of L’Aquila, where he teaches Design studios at undergraduate and graduate level. He has earned a Master of Architecture summa cum laude (2000), Faculty of Architecture, “Sapienza” University of Rome, a Master of Science with honors (2003), School of Design, University of Pennsylvania, and a PhD in Architecture (2004), “Sapienza” University of Rome. He has written articles and monographs on various issues related to urban design and regeneration. His recent research work focuses on the affective dimension of urban and architectural space, a topic on which he has published books and articles. He has been visiting lecturer and critic at several international universities and taught as Visiting professor at the Lebanese American University of Beirut and as Associate Professor at Xi’an Jiatong – Liverpool University in Suzhou, China.