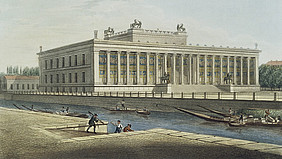 19th century: The era of architectural- isms
The aim of this course is the reinforcement of the students’ ability to analyse architectural creations focused on their composition rules, to evaluate their quality characteristics, to understand their relation with architectural theories and the conditions of the era. In parallel, the course aims at developing the apperception of historicity and continuity which bind European architecture and Art.
Content:
Ideology and visions of the 19th century and their reflection to architecture and city (urban field)
Revolutionary classicism and architectural utopias
Romantic classicism and Karl Friedreich Schinkel
Ηistoricism and the theories of Semper and Viollet-le- Duc
Eclecticism and the theory of design at the Ecole Des beaux Arts
Industrial revolution and the 19th century city
Works of engineers and gardeners
International expositions and the importance of infrastructures
The hymn to technique and the redetermination of the sense of monument
The Parisian “Passages” and modernity through Walter Benjamin.
The architecture of transition: Art Nouveau, Art Deco, Secession