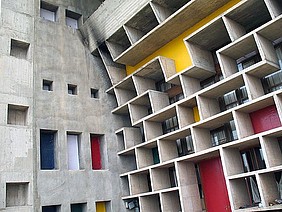 Modernity – Modernism
The aim of this course is to highlight the multifaceted relation between architecture, art, science and society, the set of conditions in which architecture of the 20th century has been created, with emphasis on modernism. Additionally, to put architecture of this era in a diachronic and historical perspective in relation to modernity through a critical survey of projects and issues from the leaders in the field of architecture, urban planning and art. Τhe course emphasizes the compositional approaches and answers that the examined works have given to the major architectural quests of that era along with the dialogue which has developed with the architectural theory of modernism.
Content:
Introduction to the sense of Modernity and Modernism
Answers to industrialization: Deutsche Werkbund and Futurism
The compositional system of Frank Lloyd Wright
Cubism, De Stijl and the conception of space
Walter Gropius – German Expressionism
Bauhaus I Architecture– Art and Technique
Bauhaus II  The leaders
Bauhaus III Architecture and other artistic expressions
Le Corbusier’s Quests
Le Corbusier’s cabanon and the quest of mediterraneity
Mies van der Rohe and the quest of perfection
The Modern City
Architectural post-war quests and the continuity of old traditions
1945 – 1960 Architectural pluralism I
1960 – 1980 Architectural pluralism II