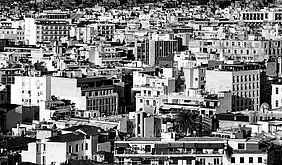 This course deals with the history of neohellenic architecture from the foundation of Greek State (1830) to now and aims at the apprehension of the special characteristics which shape its identity. The topic is approached through the comparison with the contemporaneous international evolution of architecture and the correlation with other artistic expressions focused mainly in Greece (painting, poetry, theatre, literature, music etc), in parallel to the historical, political, economic and ideological components which determine the surrounding atmosphere of the era in Greece. In the same context the course analyses important theoretical issues on neohellenic architecture and city.
Content:
The first plans for Athens as the capital of Greece and the constitution of Athenian classicism
Ernst Ziller
The architecture of transition (late neoclassicism – eclecticism)
Greek Modern architecture  of the 1930’s
Post war quests of neohellenic architecture 1945 – 1967
The Greek post war architecture of “envy” and “reconstruction” and the role of Constantinos Doxiadis
The quest of “ellinikotita”(greekness)- The answers of Dimitris Pikionis and Aris Konstantinidis
The architectural “spring” of the 1960’s in Greece and the dipole “tourism – culture”
The quest of locality and the modern gaze to Greek nature
Contemporary trends